Cycling is associated with many health benefits, but hospital admissions related to bicycle injuries more than doubled between 1993 and 2013. In 2015, 35,200 cyclists were killed due to car drivers being distracted or not seeing the cyclist. In Texas alone, there are over 800 bicycle fatalities a year, making it one of the top three states to lead in bicycle fatalities. According to the US Department of Transportation Fact Sheet, in 2012, bicycle accidents made up 2% of all traffic fatalities in Texas. They occur in urban areas with heavy-traffic and San Antonio bicyclists face great dangers due to the city’s highly congested areas. Despite the city’s attempts to implement safety features, such as separating clearly specified bike lanes from motor vehicles, bicyclist-motor vehicle crashes are on the rise. When you or a loved one are in a bicycle accident, be sure to speak with our personal injury lawyers as soon as possible so they may help you best investigate the accident and build the best claim.

Consequences of a Bicycle Accident

Victims of bicycle-automobile crashes may suffer permanent disabilities, such as paralysis, amputations, and loss of cognitive abilities. Cyclists can also suffer severe head trauma injury after a collision, even if they are wearing a helmet. Symptoms of traumatic brain injury include headaches, nausea, changes in personality, sense impairment, fatigue, difficulty focusing and completing tasks, as well as loss of consciousness and seizures. The damages caused by a bicycle accident can be extremely severe and life threatening. If your quality of life is significantly changed after an accident, it is crucial to speak with a bicycle accident lawyer. A lawyer can best assess and itemize the scope of the damage and make a case on your behalf in settlement or the courtroom. 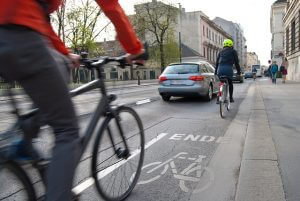 Toscano Law Firm is ready to discuss your case. No obligation case review. Fill out a form and we will be in touch shortly.

Where a Bicycle Accident Attorney Can Help

Bicyclists have the same rights and responsibilities as drivers. By law, car and truck drivers are required to share the road with bicyclists and motorcycles. Most cyclists are aware of traffic laws and yield to cars, but a speeding and reckless driver can still endanger a cyclist’s safety, resulting in serious or fatal consequences. You may be able to proceed with legal action against the driver of the vehicle that injured you with the help of a San Antonio bicycle accident lawyer.

Defending Victims of a Bicycle Accident

If you or a loved one was a victim of a bicycle accident, contact Toscano Law Firm, P.C. today. You may receive compensation for your injuries, medical expenses, loss of wages, and other expenses that you may have suffered due to your accident. Under the Texas Wrongful Death Statute, family members of a bicyclist killed by a motor vehicle may also be eligible for compensation.

For almost twenty years, attorney Patrick J. Toscano has been dedicated to serving victims of personal injury and has the expertise you need to pursue your claim. If you are searching for a personal injury lawyer, Mr. Toscano and his staff are determined to provide you outstanding counsel and fight for you. Personal injury cases have to be filed within a specific time period before you waive your rights to seek compensation, so contact us today for a free consultation.

GET HELP NOW
Scroll to top